The father of a baby critically wounded in a shooting in north Philadelphia last month has been arrested after allegedly using his child as a human shield while trying to buy drugs with fake money.

Authorities believe, Nafes Monroe, 25, had his 11-month-old son with him, to deter people opening fire, when he tried to buy drugs with counterfeit money on October 19 in the city’s Hunting Park section.

He was sitting, with his baby, girlfriend and another man, in the car in the 700 block of West Luzerne Street when the gunaman opened fire at around 7:50 that evening.

The toddler, Yazeem Munir Jenkins, was shot four times including in the head, chest and buttocks. 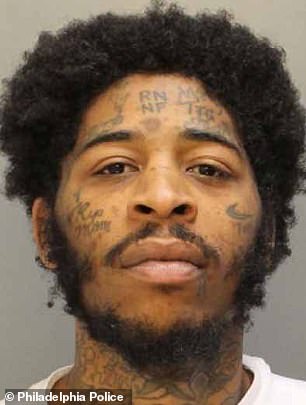 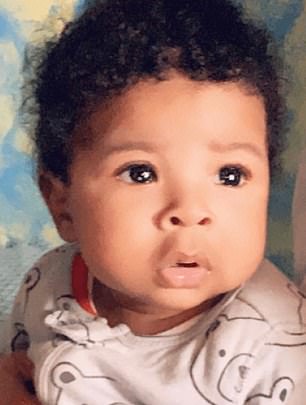 Anthony Voci, head of the District Attorney’s Office Homicide Unit, said it was not the first time the 25-year-old took his son along with him when going to buy drugs.

‘It’s our belief that he intentionally had his child with him when he was making such types of purchases, with the idea, or the belief that if someone saw that he had a child in the car that they would not fire upon him.

‘A human shield is the term that I would probably use.’

Mr Voci said the 25-year-old was arrested on Saturday and charged with endangering the welfare of a child and recklessly endangering another person – his son.

‘He was also the individual that was not only in the car with his child, in harm’s way, but drove the child to a house rather than taking him to a hospital immediately,’ Mr Voci said.

He said after Monroe eventually took his son to the hospital he dropped him off and ‘never looked back and went into the wind’.

His son remains in a critical condition in hospital.

The alleged shooter, Francisco Ortiz, 29, has also been arrested and charged with attempted murder and other related offences.